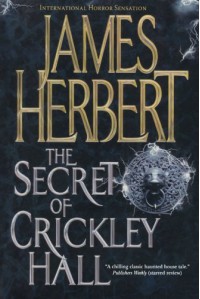 It’s almost Halloween as I write so I’m in the mood for some creepy read. If you are ever in the mood for horror fiction and you have never read anything by James Herbert you have been outrageously remiss. In the 70s and 80s James Herbert was King, practically Stephen King as teens and horror fans were reading his books all over the place (in the UK where I was residing any way I have no idea about Herbertism in other countries). His most widely known book The Rats was published in 1974 it was a barnstorming debut, an ultra-violent, graphic and horrific little novel about mutant rats. His second novel The Fog was even worse (or better, depends on how you look at it). He was 31 at the time.
The Secret Of Crickley Hall was published in 2006 when Herbert was 63, I would say age has mellowed him over the years. That said “Crickley” still pretty damn gruesome in places and not for the faint of heart. However, in addition to the Herbertian patented ew! factor this book is also quite compassionate, poignant and even sentimental. A lot of care and attention has been put into developing the characters.

This is basically a haunted house story, not a first from Mr. Herbert (see Haunted. All the haunted house tropes are in place; a nice family (with cute kids and a dog) move into a spooky old house with a dark history, things soon start to go bump in the night. The wife is open to the idea of supernatural phenomena but the husband is extremely skeptical, soon a psychic and even a paranormal investigator show up.

The book is saved from becoming pointlessly predictable by the characterization, the gradually unfolding backstory of the eponymous house and Herbert’s sheer story telling skills. I haven't read anything by him for years; I have forgotten how good he was at grabbing your attention and never letting go. However, the backstory of the house does involve some scenes of extreme cruelty to children so if you are easily offended by such scenes this book is seriously not for you. Even so, the theme of children’s basic right to love, comfort and protection is evident and even highlighted by the harrowing details of their ordeal. I don’t think the author’s intention is to titillate, not something that can be said about the violent scenes in The Rats. If I have a complaint it would be the characterization of Gabe the skeptical husband whose extreme skepticism in the face of extremely weird occurrences make him seem like an imbecile of first water. The way he relentlessly rationalizes the unrationalizable makes me want to improve his outlook with a frying pan.

The supernatural events in the story are vividly depicted and very creepy, as you would expect from an author who has been writing such material for decades. Neil Gaiman said this of James Herbert: “His first book was a bestseller, which is something that happens to very few writers. He had to do all his growing up in public. He had to learn to write in public.”. His growth as a writer over the decades of his career has been tremendous. His prose is highly readable, often witty without ever becoming clumsy; it makes for a very smooth reading experience.

Sadly James Herbert passed away a few months ago (March 2013), so this review is intended to be something of a tribute. Thanks to his prolificacy while I have read many books by him there are still many that I have yet to read.

R.I.P. Mr. Herbert you were the best.

Note: The Secret Of Crickley Hall was adapted by the BBC and broadcasted last year (2012).