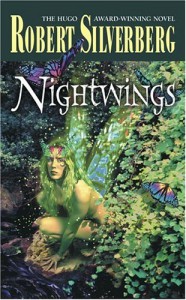 This review is for the novel version of Nightwings, which is comprised of three tightly linked novellas.

Robert Silverberg is possibly the most underrated sf writers of all time considering how long he has been at it and the numerous awards he has won and been nominated for. For some reason he just does not seem to be "in vogue" these days. It is a pity that most of the younger generation of sf readers today have never read anything by him.

What Silverberg does better than almost any sf authors writing today is to write short stand alone novels with very strange plots and excellent characterization. His special talent us to drop the reader right in the middle of a strange place and time of his imagining and gradually acclimatize you through his story telling skills rather than just making an infodump.

Nightwings is set on Earth but in a future so far flung and strange that it may as well be an alien planet. There are many guilds and mutants and genetically modified humans populating the earth which is about to be invaded by rather reasonable aliens! This novel is both post-apocalyptic and dystopian. It all ends rather optimistically with redemption for the flawed but lovable protagonist. It is astonishing how much plot, grandeur, ideas, subtext and characterization Silverberg managed to squeeze into one short novel. This book easily goes to my all time best list!
Tweet