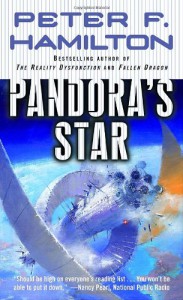 This book is fat!

That was my first thought upon picking up this book. Still with all the recommendations I have been getting from the good people at Reddit's science fiction books community ("r/Print SF") and other reviews I wanted to give it a go. With a book this long I would end up either rating it one star for wasting so many hours of my time or five stars for entertaining me for those many hours. I think I'll be magnanimous once again and go for the 5 stars option! This is not to say the book does not contain too many calories, or is entirely free of saturated fat. I believe it could have been somewhat thinner, there are superfluous characters and scenes here and there but generally book's length turned out to be one of its strengths. Considering the book's epic scope a 200 pages volume is unimaginable. Also, beside the epic sf plot the book contain elements of several genres of fiction: murder mystery, police procedural, a bit of courtroom drama, espionage, terrorism, fanaticism, a dash of soap opera, a smidgen of romance, and of course the entire kitchen sink.

From my discussions with other sf readers there are a number of detractors who criticized Hamilton for writing two dimensional characters. I feel this is understandable but not entirely justified. There are at least three characters that I care about or find interesting, and one of them is an alien incapable of speech or hearing as it lacks any faculty to handle sound and can only communicate through images, gestures or graphics. For all that he manages to be an endearing, lovable character. That said characterization is clearly not the forte of this author, there are far too many beautiful people walking about, though this is probably due to "cellular profiling" a sort of futuristic cosmetic surgery and other modifications.

Stylistically Hamilton's prose is utilitarian rather than elegant or poetic, but this is seldom a requirement for a space opera. His straight forward style does serve the material very well for propelling the story and communicating scientific details. There is one particular scene that I think is like a virtuoso sequence, a scene where a human being is described from an alien's point of view. While reading this I could suddenly imagine how strange a human being would look to an alien.

Unlike Iain M Banks' Culture books nobody is going to call Pandora's Star a literary work of art he is not a wordsmith in the way that Banks is but I think it is unfair to dismiss his work as simply "big dumb fun adventures" as he has clearly put a lot of thoughts into the world building and intricate plots, I can imagine him plotting complicated graphs to tie the myriad plot strands together.

Unfortunately there is no closure at the end of this book the story continues and concluded in the next book Judas Unchained. Well, at least it's not a trilogy, though subsequent books are set in the same common wealth universe.

This book is phat!

(Actually at 991 pages this is one of Peter F's shorter books!)
Tweet