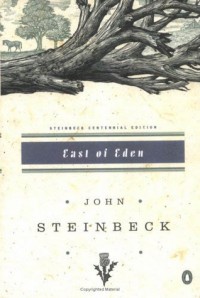 I read [b:The Grapes of Wrath|4395|The Grapes of Wrath|John Steinbeck|https://d.gr-assets.com/books/1352912927s/4395.jpg|2931549] about eight months ago, to be honest I was a little disappointed in it because I expected to like it more than I did on the basis of its reputation and because I love Steinbeck's [b:Of Mice and Men|890|Of Mice and Men|John Steinbeck|https://d.gr-assets.com/books/1437235233s/890.jpg|40283] which I read previous to that. For some reason, The Grapes of Wrath just did not resonate with me, one of those inexplicable things that can not be explained I think. East of Eden is an entirely different matter, it clicked with me all over the place and already found a place in my short "to be reread" list.

Most of the synopses for this novel that I have seen tend to indicate that this is a story of two families the Trasks and the Hamiltons and how their lives are intertwined. I have probably been reading it wrong somehow because I feel that the book is all about the Trasks and the Hamiltons are supporting characters. Lee the Chinese manservant seems more crucial to the story than the Hamiltons. The story is inspired by the Biblical story of Cain and Abel from the Book of Genesis. The influence of "Cain and Abel" is quite explicit from the names of the central characters and actual mentions of the biblical bros within the novel. That said I am going to cheat and skip the synopsis entirely because the book does have quite a lot of plot in spite of being essentially character-centric, this makes synopsizing a real chore.

The main characters really make the book for me, I am fascinated by them and their motivation. Cathy Ames has to be one of the most interesting antagonists in fiction. Here is a character who is evil simply by nature, the wealth and benefits she gets from her machinations are merely byproducts. She does what she does because that is how she rolls! Some people are just bad to the bone. This quote from the book:

It is my belief that Cathy Ames was born with the tendencies, or lack of them, which drove and forced her all of her life. Some balance wheel was misweighted, some gear out of ratio. She was not like other people, never was from birth. And just as a cripple may learn to utilize his lack so that he becomes more effective in a limited field than the uncrippled, so did Cathy, using her difference, make a painful and bewildering stir in her world.

To me that makes her some kind of fascinating anomaly or mutant, she is also quite the scene stealer, every time she shows up in the book all the other characters immediately fade into the background for me (including the actual people in my vicinity at the time of reading). Cathy reminds me of Sharon Stone's character in the movie Basic Instinct. I wonder if she tries to redeem herself at the end though? If you have read the book and some thoughts on this please let me know.

Another character who is not mentioned very much in discussions of this book is Lee, the "Chinaman", being of the oriental persuasion myself I can not help but identify with him though our lives don't actually have anything in common. If I was an actor I would love to play him in a movie adaptation, certainly I wish I had half his wisdom, decency, sensitivity and perceptiveness. Although he is a manservant he is someone to aspire to be. Interestingly Lee, along with the similarly perceptive Sam Hamilton seem to be the only characters who has a perfect understanding of what is going on and of everybody else's motivations.

Of the protagonists, I really feel for Caleb's plight. We all feel unloved at one time or another and we all feel the urge to do morally questionable things or to strike out and damn the consequences, just for that brief moment of satisfaction. Caleb is a complex character with many facets to him, more than he himself is aware of. His "nice" idealistic brother Aron is a little bland to me and seems more like a plot device. The romantic interest Abra is probably too wise for her years, but I like the calming influence she tends to have on the other characters. Unsurprisingly she and Lee get on like a house on fire.

The writing is heartfelt, eloquent yet unpretentious, at times it is lyrical without ever being inaccessible, these qualities should come as no surprise to regular readers of Steinberg. The dialogue always rings true and the characters have their own believably distinctive voices. There are also moments of levity that manage to raise a smile. The book does have it all (except killer robots).

Reading East of Eden has been a moving experience for me and a thought provoking exploration of the human heart, a book to be read again and again.
No wonder it won the Nobel Prize.
Tweet