Revelation Space (a standalone novel set in the Rev Space universe) , and it was a case of "He Shoots, He Scores!" again.

My reservation about reading Redemption Ark is that it is apparently a continuation of Revelation Space, a book I did not like that much, and thanks to my sieve-like memory I have forgotten most of the details of the settings, events, characters names etc. Still, I really wanted to read it as it is Reynolds' highest rated book (in average score) on Goodreads. Fortunately I came across Cecily's excellent review where she mentioned that it could be read as a standalone, that is good enough for me, I'll do some Googling if I really need help. So here we are! Now, if you want to read a well written and intelligent review of this book head over to the aforementioned Cecily's review, on the other hand if you are in the market for a rambling, incoherent review you have come to the right place.

The events of Redemption Ark take place a few decades after the end of Revelation Space, the central plot concerns the search for "hell-class weapons" which - as the name implies - are basically futuristic super duper WMD capable of wiping out spaceships and probably whole planets with a single shot. They are needed to protect humanity from The Inhibitors (AKA The Wolves) whose mission in life appears to be the destruction of intelligent life wherever they find it (their motivation is more complex than that but that is spoiler territory). Fans of Reynold's mind blowing epic epicness will not be disappointed with the scale of Redemption Ark. The Inhibitors are playing an extremely long game here.

The book features a couple of characters from the previous book but the central character is Nevil Clavain a man who has taken it upon himself to save humanity and having a suitably miserable time of it, I mean whoever heard of a proper hero with a "joie de vivre" attitude?

As with all the Reynolds books I have read Redemption Ark is full of "sensawonder" inventions in an epic scale setting. This book is a huge improvement on Revelation Space in term of writing and characterization. One problem I found with Revelation Space is that the female characters seem to be badass Ellen Ripley types. 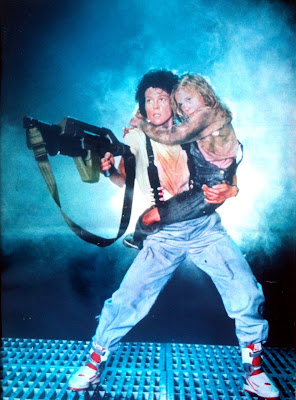 (Ellen Ripley, she's the one on the left with the gun!)

The two returning characters Ilia Volyova and Ana Khouri have matured a lot since Revelation Space, they now seem less like kickass sci-fi babes than believable human beings with flaws and insecurities. Nevil Clavain is a very complex and conflicted individuals, even the villainous characters have understandable motivation, not to mention one or two sympathetic AI characters. Along the way there are passages that ruminate upon the meaning and value of sentience, even the idea of "love" is examined in intelligent non-saccharine terms. I am a sucker for characters redemption, I often feel moved when a character is convincingly redeeming himself / herself. As the title implies redemption is a central theme of the book. One particular chapter brought a lump to my throat and that is where the fifth star of the book's rating is earned. Every book that I rate at five stars made me feel something, like a wee touch at the emotional core. Such books are all too rare (which may be a good thing, otherwise I'd be an emotional wreck every time I read a book).