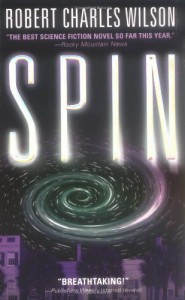 Spin is another fine example of this type of science fiction. While it is quite easy to get into it is not short on “sensawonder” and there is some very interesting world building (in a very literal sense) later on in the book. I tend to avoid writing synopses (lazy you know) but sometime it is an unavoidable integral part of the review. The basic premise in a nutshell is aliens put a black bag over the Earth inside which time runs much slower than outside the bag. Of course this is a very rough simplification because the bag is not a bag as such, it is some kind of cosmic membrane encasement, which comes with an artificial sun. The implication of this situation is quite intriguing as time whizzes by outside this encasement our Sun will evolve into a red giant in a few billion years and its gargantuan size will eventually render poor old Earth uninhabitable. The process takes a few billion years but that only gives Earth a few years as we are in a slow time environment while time speed by outside. I will not go into the why and wherefore of it of course.

With that premise you would expect some kind of hard sf where the story is paramount and the individual characters merely facilitate to drive the plot. Surprisingly this is not the case at all. Wilson puts equal emphasis on developing his characters as he does the epic sci-fi concept. There is a lot of human melodrama which verges on soap operatic at times. What with the unrequited love of the main protagonist and the story of childhood friendship that reminds me of [b:The Adventures of Huckleberry Finn|2956|The Adventures of Huckleberry Finn|Mark Twain|https://d.gr-assets.com/books/1274410225s/2956.jpg|1835605] a little.

I don’t want to go into any more details as they are well worth discovering for yourself. Beside the ingenious story and the characterization the book is also very well written. I entirely agree with what [a:Jo Walton|107170|Jo Walton|https://d.gr-assets.com/authors/1353809579p2/107170.jpg] wrote in her review:

"This is the kind of book that makes me feel excited by science fiction all over again. It makes me want to jump up and down and say “Read it, read it, read it!” to all my friends."