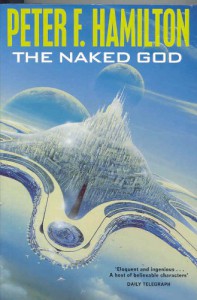 Well that took just over three weeks to read. There is more of a sense of accomplishment from reading this last volume of the Night’s Dawn Trilogy than with the others. Due to each volume being a continuation of the previous ones finishing the last volume feels like having just read a 3000 pages book, rather than just a measly 1000 or so pages.

I have been a little too lenient with my rating of the books in this series I think. At more than 1000 pages per volume I clearly have to like the books quite a lot to go through all those pages. However, the books are clearly overwritten with quite a few superfluous characters and scenes. There are so many side characters I forget who half of them are. Still, to Hamilton’s credit his narrative style is always readable, often quite riveting and the less exciting scenes never actually grind to a halt. I never felt like I was wading through molasses of dense, yawn-inducing text.

The Naked God of course carries on immediately from where the [b:The Neutronium Alchemist Night's Dawn 2|479561|The Neutronium Alchemist (Night's Dawn, #2)|Peter F. Hamilton|https://d202m5krfqbpi5.cloudfront.net/books/1347555003s/479561.jpg|6519560] left off. The possessed people are generally at war with the living except for the few nice or heroic possessed characters. Some planets and one city have been moved by the possessed to another dimension where they expect that they will be free to live their stolen lives. As with the previous volumes there are multiple plot strands to follow and it is to Hamilton’s credit that they are not hard to follow, though some subplots are more interesting than others.

In some way the Night’s Dawn Trilogy is comparable to “science fantasy” books like Edgar Rice Burroughs’ Barsoom (John Carter) series or C.S. Lewis’ Space Trilogy due to the inclusion of magical or supernatural elements like possession, ghosts and souls, not to mention the possessed characters wielding seemingly magical powers including conjuring things out of thin air. However, for this third volume Hamilton incorporates more actual science into the story than the previous ones with expositions about event horizons, naked singularities, anti-matter etc. The more “magical” elements are explained away with “handwavium” pseudo-science.

Hamilton puts a lot of effort into developing characters though some of them turn out to be quite irritating. The worst by far is the uber- possessed Quin Dexter who for some reason is blessed with the power of invisibility. This would be fine if he has more of a formidable “dark lord” type of personality rather than the foulmouthed yobbo thing he does. On the side of the angels Joshua Calvert and Louise Kavanagh are not quite believable.

One frequent criticism of this book that I have come across is the “Deus Ex Machina” ending. I personally don’t mind it too much as I feel Hamilton had been building up to it from the first book, he did not simply pull this ending out of his backside. It reminds me of the climax of a Doctor Who episode called “The Parting of the Ways”. If you have no idea what I am talking about all I can say is “I’m so so sorry!”

The main strength of this book and the series as a whole is surely the meticulous worldbuilding. I imagine the creative process involves a lot of graphing, flow charting, mind mapping and such. You get a sense of the size of the universe by the diverse settings which encompasses other continuums and the very strange creatures that live in them. Fans of inscrutable weird aliens should have nothing to complain about.

I always find Hamilton’s prose style reader-friendly without being either literary or hack-like. The odd metaphysical or philosophical passages are quite thought provoking while the few pervy sex scenes barely readable. I was quite pleased when I arrived at the end of the book and found the series to be an overwritten but fun read. Peter F. Hamilton has gone on to write better books and series. I have probably read enough from him for this year but I definitely intend to wade through more of his mega-tomes next year.

4.5 stars for the book and the series as a whole then, I am penalizing him half a star for excessive writing and he is getting off lightly here!
Tweet