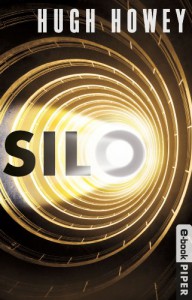 Wool is set (I believe) in the near future, the year in relation to our calendar is not indicated but there is no weird far future tech to speak of and people’s names are the same as the common names today (Peter, Bernard etc.). The post-apocalypse and dystopian subgenre of sf is often mixed up by online list makers but the world of the Silo series is clearly both. After an apocalypse (unexplained in this book), humans live in a dystopian society, sealed in subterranean silos, under the control of a shadowy authoritarian government. The open air in the world outside is poisonous and the world is inhabitable, except inside the silos’ sealed environment.

The world building in this Wool Omnibus is top notch, it seems very vivid and easy to immerse into. The culture inside the silo, the long trips up and down hundreds of levels (by stairs only, no elevators) and the “cleaning” tradition are all very believably depicted. On the whole the book is quite well written, not in term of literary achievement but in the more important term of effective and involving story telling. My only complaint is that after the half way point I felt the pacing sags considerably. There is a substantial section dealing with a rebellion which I find to be less than riveting. Fortunately the narrative moves on to a very good and rousing climax. The author manages to pull yet another rug from under my feet when I thought he has already exhausted his supply of rugs.

Characterization of the main characters is quite good, Howey switches the main protagonist two or three times and eventually settles with Juliette. Who is beautiful, resourceful, intelligent, brave, kind and tough as nails. Not exactly an original archetype but not a Mary Sue either; she has enough personality to be worth rooting for. Unfortunately she puts the other characters in the shade and when she is not in the narrative some steam seems to escape from the story. In fact I find most of the central characters introduced in the second half of the book are not quite as compelling as the previous ones.

Still, I congratulate Hugh Howey for his wonderful success against the odds against self published authors (graphic novels, film rights sold etc.). Hopefully he will inspire many more authors of his caliber and I look forward to reading more from ten series.
Tweet