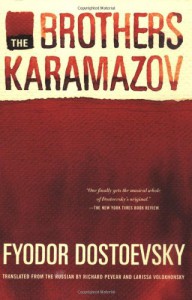 The most difficult thing about reading Fyodor Dostoyevsky is pronouncing his name I think. The first Dostoyevsky book I read was [b:Crime and Punishment|7144|Crime and Punishment|Fyodor Dostoyevsky|https://d.gr-assets.com/books/1382846449s/7144.jpg|3393917], I liked it well enough even though it was dark and sad and generally something of a downer. The Brothers Karamazov is also dark and sad yet there is an element of optimism in it. If you are attempting Dostoyevsky for the first time [b:Crime and Punishment|7144|Crime and Punishment|Fyodor Dostoyevsky|https://d.gr-assets.com/books/1382846449s/7144.jpg|3393917] is probably the easier option, being less dense, complex and simply shorter. Actually having read these two books I believe Dostoyevsky (translated) is not that hard to read, he was not one of those experimental postmodern authors that will have you scratching your head trying to decipher his prose and narrative structure. That said The Brothers Karamazov is a profound and psychologically complex novel, there are at least a couple of chapters which entirely consist of philosophical or even mystical digressions.

At the most basic level The Brothers Karamazov is exactly what it says on tin, that is a story of brothers of the Karamazov family. Three of them (and possibly a bonus one). Dmitri, the wild one who seems to specialize in digging his own grave, Ivan the overthinking intellectual, and Alyosha, the pious one. None of them were raised by their father Fyodor Pavlovich Karamazov, who is clearly one of the all-time worst dads in fiction. The novel explores how such a shabby, unloving upbringing shape the three brothers in different ways.

The narrative gradually transforms from a story of the development of the three brothers into a murder mystery followed by a courtroom drama. However, the intent is not to thrill but to explore the psychology of the main characters and the consequence of their actions. If this sounds like a drag I can assure you that it is not, most of the book is quite gripping and thought provoking. That said if you are looking for a thriller you would have to look elsewhere.

The three brothers and practically all the characters in this book are very vividly drawn by Dostoyevsky. I believe the most remarkable achievement is the characterization of Alexei Fyodorovich Karamazov (A.K.A. Alyosha) who is the heart and soul of the book. “Nice” characters are very hard to write, especially as a protagonist, they tend to be less colorful than other characters and often downright bland. For example Harry Potter is hardly the most compelling character in the series named after him, his teachers, friends and enemies are much more interesting and fun to read about. Dostoyevsky has somehow managed to make Alyosha a complex, interesting and compelling in spite of not having a single mean bone in his body.

The other two brothers are no less compelling. Dimitri’s actions and eventual fate is a great illustration of what tend to happen when the head rules the heart, his wild “love crazed fool” behavior is often embarrassing undignified, and he ends up being something of a train wreck. Ivan is intellectual to the point of pretentiousness, this also works out badly for him. Alyosha, on the other hand, has an uncanny ability to shame the very worst people with his incorruptible goodness and extract goodness from them. There is also the dastardly yet pitiful Smerdyakov who is probably an uncredited Karamazov, he reminds me of Dickens’ Uriah Heep (from [book; David Copperfield]).

The novel extols the value of honor, self-sacrifice, forgiveness and redemption, but above all love and understanding. I am certainly sold on these themes, by the time I finished The Brothers Karamazov I wanted to hug everybody.

As usual for me with the classics, I “read” it on audiobook over several weeks (a couple of months with this one). Also as usual, I am a total skinflint and opted for the free Librivox version. This is book is read by quite a few volunteers, some are better than others but at least all of their reading is understandable. I you do not want to pay $20+ for an Audible.com professional reading this is the way to go (there are of course other, rather nefarious ways to obtain audiobooks but I won’t mention those!).
Tweet