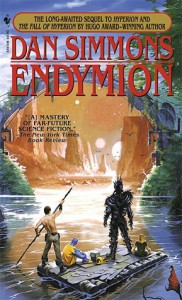 Hyperion. By then the Cantos, written by the foulmouthed poet Martin Silenus, has already become the stuff of legend, and an infamous banned book. The book begins with a frame story of the semi-eponymous Raul Endymion writing from some kind of high tech solitary satellite prison. While he is awaiting his imminent demise by cyanide poisoning he is spending his last days regaling us lucky readers with the story of his adventures with a girl called Aenea who will one day become a messiah of some kind. Aenea is the daughter of the wonderful Brawne Lamia, the female detective from the first two volumes of the series and the John Keats “cybrid” (artificial human). The book basically concerns Aenea’s journey with Endymion and an android named A.Bettik via a series of farcasters (teleportation portals). There is also a parallel plot strand of a group of military agents hunting them down. Much adventure ensues.

Unlike the first two volumes of the Cantos this book is fairly straight forward in structure and narrative style. It is basically a chase from beginning to end. I can understand why some people find it disappointing after having read the previous two books (the classic [b:Hyperion|77566|Hyperion (Hyperion Cantos, #1)|Dan Simmons|https://d.gr-assets.com/books/1405546838s/77566.jpg|1383900] especially). The tone is very different, less poetic and lyrical, the profundity is not there. One of the most remarkable things about the first [b:Hyperion|77566|Hyperion (Hyperion Cantos, #1)|Dan Simmons|https://d.gr-assets.com/books/1405546838s/77566.jpg|1383900] book is that Dan Simmons did a kind of virtuoso performance by writing in several different styles of sci-fi subgenres and other genres, including space opera, hard sf, soft sf, military sf, cyberpunk, hard boiled crime fiction, and even literary fiction. The different narrative styles also combine beautifully into an excellent and cohesive story. Endymion is not so ambitious, the prose style in this book is much more utilitarian, apart from the odd snippets of poetry here and there; it is of course very well written, one thing you can count on from Simmons. Personally I am fine with Endymion’s less literary style, as it means the author is not repeating himself.

The world building and sci-fi tech of Endymion is as great as the previous books. My personal favorite is the “archangel ships” which have faster than light capability but at a slight drawback of violently killing all the occupants of the ship who are later automatically resurrected in crèches with the aid of the Cruciform parasite (from the first Hyperion novel) in tandem with some mysterious technology. Unfortunately for the humans farcasters are all disabled by the TechnoCore (a sort of AI overlords) so if you want FTL travel you would have to accept being flattened and squished into paste then resurrected later (and also have a horrid parasite permanently attached to your chest).

Characterization is quite strong, again an expectation I have of Simmons’ books; though the characters here are not as colorful as those the from the previous Hyperion volumes. All the central characters here are believable and sympathetic and the dialogue rings true, with the occasional bits of humour. My favorite character being “A. Bettik”, an android who is humble, loyal, brave, and unfailingly polite of course. Even though an android is not a robot A. Bettik reminds me of Asimov's R. Daneel Olivaw from [b:The Naked Sun|30016|The Naked Sun (Robot, #2)|Isaac Asimov|https://d.gr-assets.com/books/1335782263s/30016.jpg|1583154] and several other of his classic robot novels.

The plot and pacing is very good on the whole, though the chapters from the military agent Captain de Soya’s point of view tend to drag a little. The thrilling climax toward the end of the book is monumentally kickass though; edge of the seat stuff featuring The Shrike who is as “sharp” as ever and an adversary who is worthy of going toe to toe with him.

4.5 stars (half a star knocked off for a few dull chapters).
Tweet