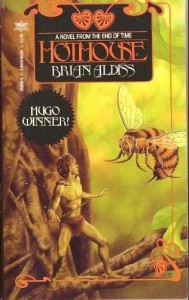 I seldom reread books because there are too many interesting unread books in the world to catch up with but some books just haunt me, demanding to be reread because I have forgotten too many details. I was walking around in a lush garden and I was reminded of this book and felt the need to reread it. This book is set on a far future Earth near the end of its existence, the sun is imminently going nova, human society and civilization have crumbled long ago. Plants and vegetable reign supreme, and human beings have devolved into primitive little green people the size of monkeys.

"Only five great families survived among the rampant green life; the tigerflies, the treebees, the plantants and the termights were social insects mighty and invincible. And the fifth family was man, lowly and easily killed, not organized as the insects were, but not extinct, the last animal species in all the all-conquering vegetable world."

As you can see, things look pretty grim for mankind! This book gives us a fascinating look at devolution in action, beside the little green people who are our direct descendants, there are subspecies of man who are presumably descended from crossbreeding of unknown origin.The most interesting example being the tummy-belly men who have a symbiosis relationship with a tree that feed and control them through a tail which function like an umbilical cord. When this is cut the tummy-belly men become clumsy, floundering and almost mindless; with a speech pattern which is particularly hilarious (much funnier than Yoda's). Aldiss' plant dominated Earth is full of ambulatory mostly carnivorous plants, John Wyndham's Triffids would have some very stiff competition here.

The best thing about this book is the vivid world-building that you can really submerge in. This is the most fascinating post-apocalyptic future Earth I have ever seen depicted in science fiction. I almost want to be there, except I don't fancy my chances in that environment, certainly I would like to see it portrayed in a decent movie. The aggressive environment reminds me of the action-packed [b:Deathworld 1|2037559|Deathworld 1|Harry Harrison|https://d.gr-assets.com/books/1327944642s/2037559.jpg|6376454] by Harry Harrison (long-time collaborator of Brian Aldiss), the aforementioned [b:The Day of the Triffids|530965|The Day of the Triffids|John Wyndham|https://d.gr-assets.com/books/1320530145s/530965.jpg|188517], and - strangely enough - my favorite computer game Plants vs. Zombies. The naivety of the human protagonists remind me of William Golding's [b:Lord of the Flies|7624|Lord of the Flies|William Golding|https://d.gr-assets.com/books/1327869409s/7624.jpg|2766512] at times. The characters are not "deep" but they are believable, the weird plants tend to have oddly whimsical names in spite of their deadliness, and the whole thing is written in very nice literate English prose.

I am not sure about the profundity that some other reviewers mentioned in their reviews of this book, if there is a subtext it is not obvious to me, but for sheer escapism you can not beat this one. A very firm 5 stars rating from me.
Tweet