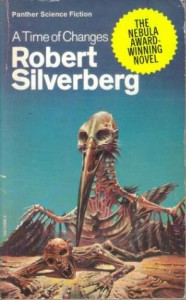 Robert Silverberg is a legend, one of the all-time greats, and among these all-time greats he is probably the most underrated. He has Hugo and Nebula Awards up the wazoo but is relatively unknown compared to the giants of the genre like Asimov, Clarke, and Heinlein, IMHO he belongs up there with them in term of accolades.

A Time of Changes is one of his best novels if his Goodreads page is anything to go by. However, if you have never read anything by Silverberg before you may want to start with something more immediately accessible like [b:Lord Valentine s Castle] or [b:Dying Inside|968902|Dying Inside|Robert Silverberg|https://d.gr-assets.com/books/1179887709s/968902.jpg|1660120]. That said A Time of Changes is indeed an extremely good and unusual book. If you are in the mood for a thought provoking (but not action packed) book by all means dive straight into this one.

The novel gets off to a slow start and never really shifts into high gear. However, once you immerse into the story, characters and settings the fascination sets in, and the slow pace becomes a kind of virtue.

“this planet was settled by men who had strong religious beliefs, who specifically came here to preserve them, and who took great pains to instill them in their descendants.”

In a nutshell the story is set on a human colony planet called Velada Borthan where intimacy is taboo and self denial is the norm. Their society operates under a Covenant that prohibits opening up one’s feelings except to a designated bondbrother and bondsister. The usage of first person pronouns “I” and “me” is considered obscene. The title of the book refers to the protagonist Kinnall Darival’s discovery of a drug that forms a temporary telepathic link between the drinkers. After his first experience with the drug it becomes clear that the Covenant is preventing people from intimacy, and thereby from understanding and loving each other.

It is actually fairly difficult to synopsize this book briefly and interestingly but it really is a wonderful thought experiment that explores human relationship, religiosity and empathy. A culture where people build walls around themselves to keep everybody at a distance and human interactions are always impersonal has far reaching implications. In some way it is an allegory for impersonal, taciturn human relationships we often encounter in real life.

I hesitate to call A Time of Changes a “difficult book” as the narrative style is straight forward, and even the timeline is almost completely linear (except for the frame story at the beginning and the end) with only one plot stand and point of view. The possible difficulty lies in the unusual theme and slow, contemplative pacing. As usual Robert Silverberg writes beautiful literary prose without lapsing into excessively lyrical passages. There is even some mild humour in the “polite circumlocution” dialogue which is the norm for this planet. For example:

”I should not have said, “One would have a room,” but rather, “Is there a room to be had? ” At a restaurant it is wrong to say, “One will dine on thus and thus,” but rather, “These are the dishes that have been chosen.” And so on and so on, twisting everything into a cumbersome passive form to avoid the sin of acknowledging one’s own existence.”

In writing this review I find that while I love the book I can not sell it very well because it is not a “fun read” as such, unless you enjoy pondering thought experiments. If you read this book and dismiss it as “boring” you may want to pause to examine what you want from a novel. If it is purely entertainment then this may not be the book for you. If you enjoy imagining how our society may operating under very different sets of rules A Time of Changes is endlessly fascinating. The Nebula Award (1971) for Best Novel is well deserved.
Tweet