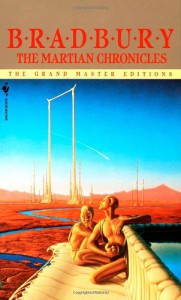 This book is a fix-up novel which is something between an anthology and a novel, and it benefits from both of its sibling formats. The stories are interrelated with only a few recurring characters but read together the whole is certainly greater than the sum of its parts. It is also worth noting that while the table of contents look as if there are almost 30 stories in the book, quite a few of these are not really stories in themselves but brief passages that lead to the next story or provide background information to move the major story arc of the book forward. In general the book tells the story of the colonization of Mars, which in a sense is a little bit like the reverse of H.G. Wells' [b:The War of the Worlds|8909|The War of the Worlds|H.G. Wells|https://d.gr-assets.com/books/1320391644s/8909.jpg|3194841] in that we invade Mars and they fight back in their quiet ways only to meet the same fate as their counterparts in Wells' book. The major difference is that there is no interplanetary war and it is only the first part of the Chronicles.

I just want to make a few notes on the main stories, the brief interludes are also great but too short my noting purposes.

Ylla (February 1999/2030*)
A Martian woman dreams (or have a premonition) of an Earthman's arrival. The actual First Contact does not go well.

The Summer Night (August 1999/2030)
Name that tune! suddenly an Earth song becomes a hit on Mars but none of the Martians can name it because they pick it up telepathically. The song's lyrics remind me of Stairway to Heaven a bit.

The Earth Men (August 1999/2030)
This one starts off as a comical First Contact story, with the Eathmen not getting the rockstar welcome they expected. It soon becomes rather tragic and ends on a dark melancholy note. Wonderful story.

The Third Expedition (April 2000/2031)
A little creepy in a nice sort of way, reminds me a little of Invasion of the Body Snatchers. No point noting specially that it is a great story because they all are in this book.

And the Moon Be Still as Bright (June 2001/2032)
Us Earthlings do have a tendency to ruin everything we touch with our inconsiderate and uncouth ways. Love that teeth knocking ending!

most men felt the great illness in them even before the rocket fired into space. And this disease was called The Loneliness, because when you saw your home town dwindle the size of your fist and then lemon-size and then pin-size and vanish in the fire-wake, you felt you had never been born, there was no town, you were nowhere, with space all around, nothing familiar, only other strange men.

I just love this passage, so evocative!

Night Meeting (August 2002/2033)
A sort of meeting in The Twilight Zone, feels like a ghost story but is not one. More of a time travelling tale but who is doing the time travelling?

Way in the Middle of the Air (June 2003/2034)
Wonderful heartfelt story about the Black Americans who have had enough of being lorded over and just want to emigrate to Mars.

Usher II (April 2005/2036)
This really does read like a Poe story, or a cross between Fahrenheit 451 and Theatre of Blood (old Vincent Price movie).

The Martian (September 2005/2036)
Poor little Martian boy. One of the best stories herein.

The Silent Towns (December 2005/2036)
A comical story about the last man in the world and the girl he is almost fated to marry. LOL!

There Will Come Soft Rains (August 4, 2026/2057)
I am not sure if this story is in the public domain (though I doubt it) but the full text seems to get posted online a lot. The first time I read it was as a standalone and I did not really appreciate it. For me reading this story out of the context of The Martian Chronicles does not quite work because I did not know what led up to the abandonment of the automated house at the centre of the story. Now having read the preceding chapters this story is has stronger impact.

This is Bradbury at his poetic best.

I am useless at deciphering themes but it seems that there is a subtext that we as a species have a nasty tendency to ruin everything, but we are not completely hopeless, if we would only try harder to live in harmony with each other and with nature.

Fantastic from beginning to end, and effortless 5 stars.