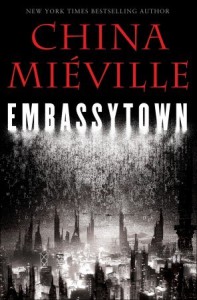 Aliens so alien they just alienate you with their alieness.

That is what you have to look forward to. Embassytown is a brave move by China Miéville, it is not an easy read, it is full of neologism, and it has a steep learning curve. The author made an effort to create something special and he expects some mental exertion from the reader too. In order for the reader to indulge the author they generally need to have a store of goodwill for that author to want to make the effort. Basically, this should not be your first Miéville book*. However, this is a great book, an amazing feat of imagination, and a real work of art. This is my fifth Miéville book, and in my estimation it is the best so far.

I normally dislike writing synopses but on this occasion I'd like to try writing a Ridiculously Simplified Synopsis like they have in the otherwise inferior Shelfari website. Here goes:

On a planet where lying is impossible, one man started lying.

This sounds like a bad trailer for the Ricky Gervais movie The Invention of Lying but this book is nothing quite so lame. It is in some way the gist of the novel but does not really cover all the bases. The impossibility of lying only applies to the alien Language (always spelled with a capital L) which can only be spoken with two voices (sort of in stereo), it requires two very similar humans to speak them. Such pairs of humans are trained and "grown" (not bred) to be Ambassadors for the human colony in the titular Embassytown. One day a pair of very unusual Ambassadors arrive from Bremen (humanity's home planet) and all hell break loose when they start to speak.

The difficulty with this book lies in the neologism, the large numbers of terms that Miéville coins without direct explanation. He leaves it to the reader to figure out their meaning through the contexts in which the words are employed. This is not as hard as it sound and you don't need to understand every one of these words to follow the story. As a reader I feel somewhat flattered that the author is crediting me with a certain degree of intelligence, and I am glad he did not overestimate my IQ by much. I believe most readers can follow this book but they do need to be patient, especially during the first 60 or so pages. I must confess I did initially search for a bit of help online, and the most helpful assistance came from Miéville himself in this charming video clip.

While reading the first few chapters I was initially annoyed with his presumption of my intellect but later I became amused with the new words' opaqueness. China Miéville's trademarks of lyrical prose, sense of humor, skillful characterization and weirdness are all here. By the end of the book I felt like my mind has been expanded and I am once again a happy punter, and proud to call myself a Miéville fan (Miévillian?).