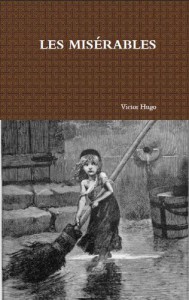 Q: What would be Victor Hugo's reaction be if he saw the musical/movie version of his book, Les Miserables?
A: "What sorcery is this?"

The book is full of profound quotable lines, but I went with the above anyway, it just tickled me when I read it. Phew! Took me a full month to read Les Mis and I can’t say I enjoyed every page but it ends up with a 5 stars rating anyway. “What sorcery is this?” indeed! Les Mis is clearly back in vogue since the musical movie came out and earned well-deserved accolades and Oscar noms.

I have been a fan of the stage musical for years since I saw it in London West End. I have considered reading the original source material, but the formidable length of it has always been dissuasive, particularly as I have read very little historical fiction. The book is by no means an easy read, the writing is described by [a:Orson Scott Card|589|Orson Scott Card|https://d.gr-assets.com/authors/1294099952p2/589.jpg] as "voluminous overwriting that is typical of 19th-century fiction" (link).

It starts slowly with the introduction of Monseigneur Bienvenu Myriel a minor character who plays a pivotal role in inspiring the protagonist Jean Valjean (SN# 20641) to forsake his thieving ways and become an honest, virtuous man (“bought his soul for God”). The life and times of the good bishop make for a dull read, but as soon as Jean Valjean shows up the narrative becomes very gripping and dramatic. This is not to say reading it is plain sailing from that point. When the narrative is focused on the characters the novel is extremely readable, riveting and even moving, but Victor Hugo often interrupts his narrative to go off on lengthy tangential expositions that will leave many readers snoozing with the book transforming into a pillow.

The book is just too damn good to give up on, however, if you lack the patience to cope with lengthy chapters about the battle of waterloo, the history of the Paris sewers, the granddad super long winded speech etc. my advice is to skim like mad. Certainly the almost unreadable tangential parts that had me skimming like a thrown pebble on water. You have to be careful not to miss the points where the story resumes though.

When Victor Hugo is not rambling like an eccentric uncle his prose style (or the English translation of it) is beautiful, lyrical, often witty and gently humorous. Most of the characters are lovable or wonderfully despicable, Valjean, the unrequited Eponine, the overzealous Javert and the irredeemable Thenardier being my personal favorites. The other two central characters Marius and Cosette are more problematical. Marius comes across as a little dense to me and Cosette a little vapid, very different from the resourceful much abused little girl she was to begin with.

In spite of my complaints, this really is one of the all-time best reads, and some ideas, characters, dialogues and scenes will stay with me for the rest of my days. This is why in spite of being partially unreadable I rate it at 5 stars (though 20641 stars would be more appropriate).
Tweet