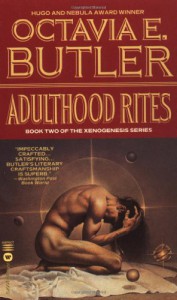 I find it oddly difficult to review an Octavia Butler book without filling it to the brim with cringe inducing sentimentality and hyperbole but I'll be damned if she doesn't make me all pensive and a touch maudlin every time I read her books. I get this feeling that her kindness and compassion always seep through her books and it makes me feel a little wistful that she is no longer with us.

Adulthood Rites is the second volume of the Lilith's Brood trilogy. In a nutshell it is the story of the last humans living under the domination of seemingly benign aliens (“Oankali”) who saved our species from extinction on an almost destroyed Earth. The saved people are taken away to live on board their spaceships while the aliens clean up the Earth to make it habitable again. The first book [b:Dawn|60929|Dawn (Xenogenesis, #1)|Octavia E. Butler|https://d.gr-assets.com/books/1388290339s/60929.jpg|1008111] is about life on board the ship, Adulthood Rites is about mankind’s return to repopulate the Earth and the price we have to pay for the alien’s rescue.

This second volume shifts the focus of the story to the point of view of a new protagonist Akin who is the son of Lilith lyapo, the main character of [b:Dawn|60929|Dawn (Xenogenesis, #1)|Octavia E. Butler|https://d.gr-assets.com/books/1388290339s/60929.jpg|1008111], and two other alien parents. Interbreeding with the alien is the price we have to pay for being rescued from extinction. The mating system is pretty weird but don’t expect to read any scene of kinky threesome sexual congress. For the sci-fi enthusiasts there is plenty of mind blowing bio-technology with living ships, habitats food processing units and other bizarre devices. The Oankali aliens with their versatile tentacles, metamorphosis and third sexual gender are wondrously imagined. The post-apocalypse Earth being repopulated is also very vivid.

The main virtue of the book for me though is the ideas, themes or principles behind these wild inventions. Ms. Butler communicates her points through story telling without the narrative ever coming across like preaching. One of the major themes of this book is man’s “genetic contradiction” which is our tendency to combine intelligence with hierarchical behavior which eventually leads to blowing ourselves up. According to the aliens, left to our own devices Man will always self-destruct but we are too valuable as a species to allow becoming extinct so they have modified the humans to only procreate with at least one alien partner.

The story is full of dilemma and moral quandaries, everybody is right and wrong at same time. If I was reading this book as a teenager I would have been swept away by the sense of wonder and the world building. Reading it as an adult I find much more interesting issues to think about. Ms. Butler’s character development talent is second to none. They are so believable that sometimes the well-intentioned but obstinate characters actually make me angry. There are no mustache twirling villains or (God forbid) “Dark Lords” here but the ordinary people seem much more dangerous.

You will probably want to skip this paragraph because it will probably make you roll your eyes. I just want to say that I think Octavia Butler epitomizes the best of what a human being could aspire to be in term of decency, kindness and wisdom. I am not looking forward to reading all her books because then there won’t be any more. That said I am going to read the final book in this trilogy, [b:Imago|60934|Imago (Xenogenesis, #3)|Octavia E. Butler|https://d.gr-assets.com/books/1389478182s/60934.jpg|6589483], immediately after this!
Tweet