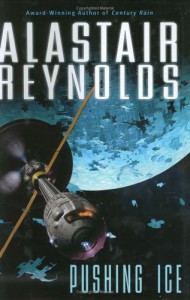 Alastair Reynolds is like a sci-fi triple threat, big “SFnal ideas”, unpredictable plot, and well developed characters, all wrapped up in very readable narrative. After reading six books by him I now feel like I can always come back to him a “reliable author” for a good reading experience. One of these days he will probably let me down badly because that always happens when I become complacent about an author but I see no sign of that so far.

Pushing Ice is often cited as one of Reynolds’ best books by the PrintSF online reading community. While I have some complaints I can understand the enthusiasm. One the face of it the plot seems like a BDO themed story made popular by the likes of Clarke’s Rendezvous with Rama and Greg Bear’s Eon. However, Pushing Ice switches gear several times and the story is more about the characters, colonization and the last remnant of humanity’s fight for survival.

Putting aside the patented Reynolds enigmatic prologue, the story takes off when Janus, one of Saturn’s moons, suddenly starts moving under its own motive power. Imagine our moon suddenly revving up and zooming away, of course we would want to give chase. In this case Janus is the moon zooming away like a spaceship, because it is in fact a spaceship in disguise. Our heroes are comet ice miners whose spaceship happen to be the nearest to Janus, so they are assigned by the Government to follow the runaway moon. Unfortunately after landing on Janus they find that it is accelerating and traveling much faster than they bargained for, they have come too far and too fast to go back home.

The first half (may be 40%) of the book is similar to other BDO themed sf novels in that a mysterious alien object is found and the beings who made it are entirely absent. From the characters' viewpoint the story spans over a hundred years but in objective time many more years have passed since the discovery of the runaway moon due to the time dilation effect.

Janus's arrival at a huge structure in the Spica star system launches the second phase of the story where the crew of the mining ship has to colonize the moon they just chased and landed on. They spend decades making the moon their home, during which time they meet a (very) alien race that is not responsible for creating the Janus ship. Before too long other alien races show up and all hell soon break loose.

There is a hell of a lot of character development in this book, especially for the central characters. At times I think there is too much of it. There is a feud between two main characters that span almost a century. Reynolds seems to be very interested in exploring the theme of how an intense friendship can turn into the bitterest enmity. The ramifications of this feud turn out to be very serious for both humans and aliens as factions and infighting inevitably develop between the human colonists. To make matters worse some bizarre, very unpleasant and unhygienic aliens show up to exploit this very human foibles for their own ends.

My gripe with the human drama aspect of the book is that there is a little too much of it, especially as the feud goes on for almost a century, well pass the point of plausibility. The two characters are essentially good people after all. However, given that I am not as interested in this feud as Reynolds wants me to be, it never actually bog down the book, which is a credit to his narrative skill. As with all the Reynolds books that I have read so far the sci-fi aspect of the book makes everything worthwhile. There are enough weird aliens, amazing super science and mind bending scenarios to keep me riveted the entire time. The climax and denouement also work perfectly. So in spite of my reservations about the surfeit of human drama in still going to rate this book at 5 stars as the good so far outweigh the bad that the latter just slide right off the scale.
Tweet