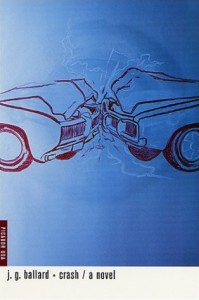 “Two months before my accident, during a journey to Paris, I had become so excited by the conjunction of an air hostess's fawn gaberdine skirt on the escalator in front of me and the distant fuselages of the aircraft, each inclined like a silver penis towards her natal cleft, that I had involuntarily touched her left buttock.”

Say whaaat??!! Honestly, what the hell is this book I just read? What was the author smoking when he was writing it? (And where can I get some?). I have to say this is one of the most interesting books I have ever read, and also one of the most boring. If that makes no sense then I have just summed up the book from my perspective.

According to Wikipedia Crash is about “symphorophilia”, basically getting turned on by watching disasters like fire and traffic accidents. More specifically the characters in this book find car accidents "hot". Yes, this is a thing! (at least in the context of this novel). This is almost sufficient to synopsize the whole book as there is very little in the way of plot to speak of.

Considering the “erotic” nature of the story, the narrative tone is oddly detached and clinical. Something I notice with J.G. Ballard’s writing style while reading The Drowned World. None of the characters seem to feel any strong emotion (unless “sudden boner” counts as an emotion). I suspect it is not Ballard’s intention that the readers should identify with his characters (at least I hope not). That is all very well but it makes it very hard to be invested in the narrative and reading the book is something of a slog in spite of the interesting ideas. According to some of the erudite professional reviews I have read the main theme of Crash is “Modern Technology in Human Relationships” and here I thought it was just about people shagging in damaged cars.

The characters are all unsavory deviants, the first-person narrative is by “James Ballard”. What the hell? Well, apparently it is to blur the line between fiction and reality. If you say so Mr. B (start backing away slowly). The central character is actually not Ballard but Dr. Robert Vaughan who spends the whole book walking around with semen stains on his trousers. For all his numerous scars and lack of hygiene he is apparently very sexy, a man the happily married Mr. Ballard would definitely go gay for. Anyone looking for a bit of titillation better look elsewhere as the sex scenes often involve orifices which are… oh never mind!

Should you read this book? I have no idea, I am off to take a bath and have a lie-down.
Tweet