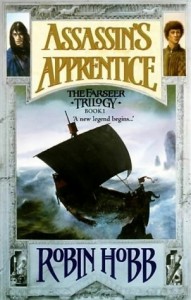 Damn Amazon and their clever marketing, Farseer Trilogy #1 (Kindle edition) priced at $0.99, Farseer Trilogy #2 at $7.99! Of course they know you are going to be hooked on the series by book #1, you’d have to be a philistine not to be (just kidding, if you truly dislike it just ignore me). I don’t even read a lot of fantasy these days, I used to read two sci-fi books for every fantasy title nowadays the ratio is more like 10:1. It’s just a personal preference, I prefer spaceships to dragons. Still, Assassin's Apprentice is a pattern buster for me, book #2 has already added to my TBR.

Assassin's Apprentice is a “bildungsroman”, such a funny little word that sounds like a German chewing gum. This is indeed a story of the protagonist’s growth from childhood to adulthood. There is even the obligatory frame narrative at the beginning and the end. All very tastefully done. This is the story of Fitz a young bastard son of a prince and a commoner of unknown background (she is basically not in this book). At the age of six Fitz is taken by his impoverished maternal granddad to an army base to be live with his royal relatives in the capital city of Buckkeep. Being a bastard he can hardly expect to live the high life, but the granddad just wants one less mouth to feed. He is immediately taken under the wings of Burrich a stableman, who teaches him to care for animals where he his discover a supernatural affinity to mentally communicate with them. At Buckkeep he begins to make friends and enemies and goes to different classes to learn various skills, fighting, reading, writing, manners etc. The most remarkable skill that he learns through highly secretive private lessons taught by an enigmatic teacher in the middle of the nights is Assassination. As time goes by he gets involved in court intrigues political machinations and of course assassination.

This is quite an eventful novel and I don't want to describe all the plot twist and turns because I'd be here all day and spoil the book for you. Suffice it to say that this is a very well written and entertaining book with enough pathos to be emotionally invested in. Robin Hobbs is a pseudonym of Margaret Astrid Lindholm Ogden, her writing style reminds me of her fellow American SF/F authoresses Lois McMaster Bujold, and Connie Willis; smooth and clear prose, good witty dialogue and very good characterization.

The colorful almost Dickensian cast of characters is a particular strength of this novel. Fitz the protagonist is likable and sympathetic, he is talented but makes a lot of mistakes (He may be a bastard but he is not a complete bastard!). Thankfully he is not unbelievably good at everything he tries, a tired archetype of many fantasy protagonists. The master assassin Chade is suitably mysterious, stern but with a good heart, the most interesting supporting character is the Fool who speaks in riddles and possesses some kind of preternatural foreknowledge.

The antagonists are individually less interesting but there is a major threat called the Red-ship Raiders who turn good people into emotionless evil weirdoes. The world building is carefully done with a nice sense of place, the places Fitz finds himself in are quite vividly described. The fantasy aspect of the book is fairly subtle, no wild incantations of magic spells and such. The magic in this book tends to be types of mental powers, telepathy, telekinesis, second sight and such.

Assassin's Apprentice reminds me a little of Patrick Rothfuss’s [b:The Name of the Wind|186074|The Name of the Wind (The Kingkiller Chronicle, #1)|Patrick Rothfuss|https://d.gr-assets.com/books/1270352123s/186074.jpg|2502879] and J.K. Rowling’s Harry Potter books. This book actually predates both of them and has its own unique appeals. It is also not a children or YA book, the plot takes some very dark and violent turns. The theme of honestly, integrity, loyalty and courage is evident, and the author’s kindness and humanity shine through out the book; as is her love of dogs which are lovingly and believably portrayed here.

If you like fantasy and have not read this book then the recommendation is a no brainer. At $0.99 it is practically a giveaway; you can’t even get a decent hot dog for that.
Tweet