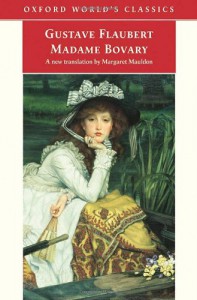 I like to start a book knowing almost nothing about it. With Madame Bovary the only thing I knew was that it’s a French classic and often cited one of the all-time great novels. I knew absolutely nothing about the plot going in, though I expected it to be centered on the eponymous Madame Bovary, whoever she is. I imagined she is probably a French equivalent of [b:Jane Eyre|10210|Jane Eyre|Charlotte Brontë|https://d.gr-assets.com/books/1327867269s/10210.jpg|2977639] or [b:Tess of the d'Urbervilles|32261|Tess of the D'Urbervilles|Thomas Hardy|https://d.gr-assets.com/books/1434302708s/32261.jpg|3331021]. I could not have been more wrong.

The protagonist Emma Bovary turns out to be a kind of anti-heroine and the novel is so downbeat it makes [b:Tess of the d'Urbervilles|32261|Tess of the D'Urbervilles|Thomas Hardy|https://d.gr-assets.com/books/1434302708s/32261.jpg|3331021] look like [b:Three Men in a Boat|4921|Three Men in a Boat|Jerome K. Jerome|https://d.gr-assets.com/books/1392791656s/4921.jpg|4476508]. Basically Emma Bovary is a girl who married a dull country doctor just so she could leave home but soon becomes a very desperate housewife. The story is about her infidelity and the consequences to herself and those around her. She seems to imagine herself as the protagonist of a soap opera; this is apparently from reading too much romantic fiction, Fifty Shades of Grey would have been right up her alley.

This is not an easy book to read (or listen to in my case) as there is not a single character to empathize with, even the nice Charles Bovary is too idiotic and delusional to generate much sympathy. Of course the author Gustave Flaubert was well aware of this, the reader is not supposed to like any of them. Their behavior and situation only serve to convey his disapproval of the French society of the time, particularly the bourgeoisie and romanticism.

The great attraction of reading fiction is to follow the characters’ thought processes which are often very alien to my own, to be somebody else for a while. I found Emma Bovary’s way of thinking very selfish and immoral but nonetheless quite fascinating. Unfortunately the other characters are not so interesting and when Emma is “off stage” the narrative becomes rather plodding.

The translation by Eleanor Marx-Aveling is quite readable but I have no idea how good it is as I don’t read French. There are some nice lines like “a demand for money being, of all the winds that blow upon love, the coldest and most destructive” and I imagine the original French version would have been more of a pleasure to read, though I would not start taking French lessons just to read this book. [b:The Count of Monte Cristo|7126|The Count of Monte Cristo|Alexandre Dumas|https://d.gr-assets.com/books/1309203605s/7126.jpg|391568] may be, but not this one.

If you like morality tales this book is for you, if you are looking for some kind of page turner this is not it. I listened to Madame Bovary on a free audiobook from Librivox, unfortunately this is not one of their better offerings. It is a multiple readers one, and some of the readers are just awful and incomprehensible. I had to supplement a few chapters in print (e-book) format to follow the narrative of a few chapters. If you get Amazon’s free Kindle e-book edition you can get the Audible audiobook with it for $2.99. I wish I had done that!
Tweet