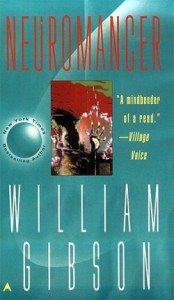 This is my third reading of Neuromancer, the first time was while in my teens decades ago, I hated it then and was not able to read more than 50 pages. The second time was around five years ago, I liked it better then but still found much of it inaccessible. This third reading was inspired by [b: The Three-Body Problem|20518872|The Three-Body Problem (Three-Body, #1)|Liu Cixin|https://d.gr-assets.com/books/1415428227s/20518872.jpg|25696480] which is only partially a cyberpunk book. I keep coming back to this problematic book not because I love it, but because the story and its iconic status interests me and I really want to “get it”. I think I have got it now. Mostly.

Neuromancer is just about the most divisive classic science fiction book I can think of. Sure, some people do not like [b: Dune|234225|Dune (Dune Chronicles, #1)|Frank Herbert|https://d.gr-assets.com/books/1434908555s/234225.jpg|3634639] or [b: Foundation|46654|The Foundation Trilogy (Foundation, #1-3)|Isaac Asimov|https://d.gr-assets.com/books/1316412178s/46654.jpg|41350] but such "blasphemers" are few and far between compared to the opponents of Neuromancer*. The basic story is not too hard to follow or summarize. Ex-hacker and junkie Henry Dorsett Case is recruited by a mysterious sexy badass woman called Molly Millions on behalf of an even more mysterious man called Armitage to do some unspecified hacking for him. Previously Case was injected with a mycotoxin that damaged his nervous system and disabled his ability to plug (jack) into cyberspace. Clearly hacking entirely via keyboard and a mouse is no longer an option. Armitage has the means to repair the mycotoxin damage so Case – who is desperate to get back into cyberspace where he belongs – quickly agree to take the job. The job of course turns out to be difficult and deadly, involving AIs, a space habitat, the Turing Police, killer robots, VR and even a ninja!

If this sounds like a hoot, it is, the difficulty lies in deciphering William Gibson’s writing. Thankfully his writing is not the kind of "stream of consciousness" post-modern style that you find in the likes of [b: Ulysses|338798|Ulysses|James Joyce|https://d.gr-assets.com/books/1428891345s/338798.jpg|2368224] or [b: Mrs. Dalloway|14942|Mrs. Dalloway|Virginia Woolf|https://d.gr-assets.com/books/1319710256s/14942.jpg|841320], the punctuations and the quotation marks are all in place. Gibson’s prose style is fairly readable but it is stuffed to the gills with neologisms, jargons and slangs; he also has a penchant for employing techy and hip metaphors. His dialogue is much more problematical. Beside the neologisms and slangs most of his characters speak in choppy and terse sentences where pronouns and prepositions are often deemed unnecessary. The heavily accented dialogs from a couple of Rastafarian characters serve to exacerbate the comprehension issues. While the basic plot is fairly simple the twists and turns of the storyline can seem quite convoluted and the reader needs to maintain focus at all time and not start wandering about what to have for lunch etc.

It is a shame that Neuromancer is quite difficult (for some) to access because there is fast paced thrilling adventure buried underneath the opaque language. The world building is also excellent from the grimy dystopian Chiba city at the beginning of the book (where the sky is famously “the color of television, tuned to a dead channel”), to the Sprawl city, the Freeside luxurious space habitat and the weird Villa Straylight mansion. The cyberspace of course is the most imaginative location (if you can call it that) in the book. Sometime it seems to look like a place pixelized geometrical shapes, other times it is in full VR mode and looks just like reality. The scenes inside cyberspace are some of my favorites, though the word cyberspace itself seems oddly quaint these days.

Gibson also did a good job developing (and designing) the main characters. Case is damaged and flawed but also complex and sympathetic. Molly is a wonderfully vivid creation, with her numerous implants, her cybernetic eyes and deadly assassination skills. She literally lights up every scene she is in. The AI characters are also great but I will leave you to discover them for yourself. There is even a smidgen of an unrequited love story in there somewhere. Some people take to Neuromancer like ducks to water, I envy them, but if you are not so adaptable you may want to avail yourself to online sources like the chapter by chapter guide on shmoop.com. It is extremely helpful but I find their feeble attempts at humour a little grating (I much prefer Sparknotes.com but they don’t cover this book).

So with plenty of help at hand there is no reason why you should not read this book if you are interested. This is a difficult book to rate in quantitative terms, I will break the process down into components: